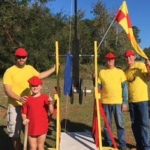 You don’t have to travel far or spend a lot to experience the drama and excitement of medieval Europe right in your own back yard. The 4th Annual Punkin Chunkin contest was held at the East Lake County Library in Sorrento. Several well organized and enthusiastic teams set up their trebuchets and catapults in order to see who could come closest to the castle (actually a 30 gallon garbage can in disguise) 100 feet away. The projectile was an orange object known as a pumpkin! The teams competed in several categories; closest to the castle, best decorated artillery, best costumes and the “best” decorated gourd (pumpkin).

If you are not familiar with the trebuchet (ours is known as the “Hanson Hurler”), it is an engineering marvel that transfers potential energy into kinetic energy and launches an object a great distance. The design is a classic STEM project of the Middle Ages. By the way if you are not familiar with STEM, ask an elementary or middle schooler. They know all about Science, Technology, Engineering and Math — all key skills used by the backyard engineers, mathematicians, scientists and physicists that built our machine. It was a well orchestrated activity, with half the family designing the frame and the other half building the arm. Once complete, many of the grandchildren did a marvelous job of painting both the trebuchet and each other! This was a fun family activity that continues each year. We spend the morning fine tuning the Hurler, compete, and then we think about how we can improve our machine for next year. Now that is excitement!

This year the “Hanson Hurlers” were able to capture 1st place in the most accurate category as our second toss landed just ONE (1) foot from the target! We also took home the trophy for the best decorated structure (see how that paint job paid off). However, the real winners were those members of the family that had fun getting ready for, participating in and then sharing the activity. Stay tuned to learn of the date for next year’s event so you to can become part of all the excitement.

More from the Blog